Temenos is the analytical sacred space where transformation is ongoing.

“Jung wrote the conclusion of Liber Novus not with pen upon its many remaining blank pages, but in stone at his Bollingen Tower on the shores of Lake Zurich. This was his shrine to Philemon, his repentance of the Faustian sin—the hubris of modern consciousness that refused a place of welcome to the Gods” … Lance Owens, The Hermeneutics of Vision, C.G. Jung and Liber Novus, 2010

…” And then - I don't know how else to describe it - Jung came towards me, but not as a man although it was unmistakably him. He came like a wind moving in a spiral, stirring everything but at the same time perfectly still. It was as if he was silently speaking from everywhere, but also from inside myself.

He carefully explained to me the real meaning of the word "home": where my true home is. At that time, I had no way of knowing just how appropriate his advice would be, considering how I'd have to spend most of my adult existence moving from place to place without any fixed or ordinary home. He went into telling me, through the silence, what I had to do; offered me guidance for the rest of my life. But finally, this strangest of meetings was over and I knew it was the moment to go.” (Kingsley, Catafalque, Back to the Source, vol. 1, p.100). Psychotherapy in a changing world

“We live today in a time of confusion and disintegration. Everything is in the melting pot. As is usual in such circumstances, unconscious content thrust forward to the very borders of consciousness for the purpose of compensating the crisis in which it finds itself. It is therefore well worth our while to examine all such borderline phenomena with the greatest care, however obscure they seem, with a view to discovering the seeds of new and potential order …The symbols of the circle and the quaternity, the hallmarks of the individuation process, point back, on the one hand, to the original and primitive order of the human society, and forward on the other to an inner order of the psyche. It is as though the psyche were the indispensable instrument in the reorganization of a civilized community as opposed to the collectivities which are so much in favor today, with their aggregation of half-baked mass-media.” (Jung, C.W. 16, #589).

“In these circumstances, the immunizing of the individual against the toxin of the mass psyche is the only think that can help” (Jung, op. cit., #443).

“In this chaos of chance, synchronistic phenomena were probably at work, operating both with and against the known laws of nature to produce, in archetypal moments, syntheses which appear to us miraculous . . . This presupposes not only an all-pervading, latent meaning which can be recognized by consciousness, but during that preconscious time, a psychoid process with which a physical event meaningfully coincides. Here the meaning cannot be recognized because there is yet no consciousness.” (Jung, 1976, Letters II: 1951-1961, pp. 494–5)

“Everyone carries a shadow and the less it is embodied in the individual’s conscious life, the blacker and denser it is. . .. The shadow is merely somewhat inferior, primitive, unadapted, and awkward, not wholly bad. It even contains childish or primitive qualities which would, in a way, vitalize and embellish human existence.” (Jung, Psychology and Religion, op. cit., p. 76).

“The inferior and even the worthless belongs to me as my shadow and gives me substance and mass. How can I be substantial without casting a shadow? I must have a dark side too if I am to be whole; and by becoming conscious of my shadow, I remember once more that I am a human being like any other.” (Jung, Problems of Modern Psychotherapy, ibid., p. 59).

“Under certain conditions it [psyche] could even break through the barriers of space and time precisely because of a quality essential to it ... its relatively trans-spatial and trans-temporal nature… The possible transcendence of space-time ... is of such incalculable import that it should spur the spirit of research to the greatest effort” (Jung 1934/ 1960, The Soul and the Death, CW 8 para 813)

“The God appears to us in a certain state of the soul. Therefore, we reach God through the self. Not the self is God.... The God is behind the self, above the self.... But he appears as our sickness, from which we must heal ourselves.”

“For in the first instance the God’s power resides entirely in the self, since the self is completely in the God, because we were not with the self. Therefore, we must wrestle with the God for the self. Since God is an unfathomable powerful movement that sweeps away the self into the boundless, into dissolution” (Jung 2009, 338). 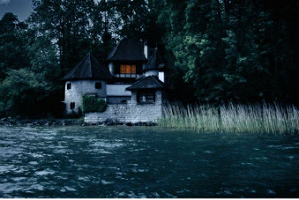